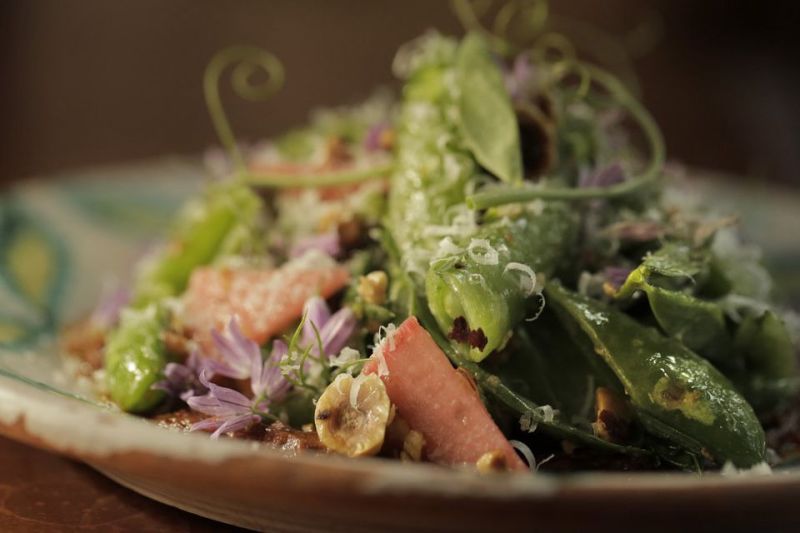 On a Wednesday evening at Park Kitchen, chef David Sapp rests a slice of hard-grilled pork terrine in a bowl of sushi rice and leek kimchi. Sapp, wearing a midnight-blue apron with tweezers emerging from the front pocket, looks out at the quiet dining room, then carries the finished plate to a table of guests himself.

That simple act of delivering a plate signals a major shift in the way we eat. Earlier this month, Park Kitchen joined the dozens of restaurants across the country that have ditched the traditional end to most diners’ evenings: calculating the tip. To help streamline the change, the Northwest Portland restaurant cross-trained employees on a new hybrid service model, removing traditional “back-” and “front-of-house” roles.

Restaurant owners say the change, which comes as Oregon and other states prepare to raise the minimum wage, attempts to address the income disparity between servers, who receive tips, and cooks, who do not.

Tipless dining, common throughout the world, quietly took hold in the United States through pop-ups, tasting-menu counters and fine-dining restaurants, many of which sell tickets for their meals with the tip already included. But until this year, the mainstream impact has been limited.

Though Portland isn’t at the front of the trend, at least a half-dozen local restaurants have incorporated gratuities into the price of the meal. Some have adopted similar “One House” models to Park Kitchen. Many, including Park Kitchen, Le Pigeon, Farm Spirit and Navarre, have agreed to sport a “gratuity free” logo in their windows, alerting customers that tips are not needed.

The first major domino fell last October, when New York City restaurateur Danny Meyer announced he would eliminate tipping at all of his restaurants, including The Modern, Gramercy Tavern and global hamburger chain Shake Shack. For Meyer, the move was about supporting equal wages between front- and back-of-house staff, and preemptively addressing New York’s rising minimum wage. In the months that followed, chefs across the country have watched to see what would happen.

Chef Aaron Adams opened Southeast Portland’s Farm Spirit last summer, selling all-inclusive tickets with no expectation of a tip. Its salaried chefs, who double as the restaurant’s servers, painstakingly arrange vegetable dishes then hand them across a long counter to guests.

“Everyone is looking to the future of $15 minimum wage,” Adams said, chef and owner of Farm Spirit. “Nobody wants to get caught with their pants down. It’s going to take a lot of people in the industry who own multiple restaurants, like Danny Meyer, to see the writing on the wall.”

Starting this summer, Oregon’s minimum wage will begin rising across the state, settling at $14.75 in the Portland area by 2022. After 2022, minimum wage will increase depending on cost of living, pushing it among the highest in the nation.

Why some Oregon restaurants are ditching tipping

In February, the U.S. Court of Appeals for the Ninth Circuit complicated things further, ruling that front-of-house staff such as servers and busboys, could not be required to share their tips with cooks or dishwashers. Many restaurants had used the practice, known as a tip pool, to raise back-of-house pay, and to ease their bottom lines. Eliminating tipping is a way for restaurant owners operating on thin margins to raise back-of-house pay.

In many states, tips are used to supplement a lower minimum wage for servers, a practice known as a “tip credit.” Oregon has no tip-credit law. Servers here earn a base pay of $9.75 an hour, before tips. At fine-dining restaurants, where tips can rise to three figures, that number can grow much higher.

Not everyone has found the new model so painless.

Joe’s Crab Shack, a national seafood chain with one metro area location, experimented with ditching tipping at some of its restaurants, but rolled back the policy after customers said they didn’t like losing the incentivising control of tipping, and didn’t trust management to fairly distribute the funds. In Northwest Portland, Park Kitchen sister restaurant The Bent Brick closed over the Fourth of July weekend, just as it was planning to eliminate tipping. Owner Scott Dolich said the closure was unrelated to the change.

Southeast Portland beer hall The Loyal Legion opened with a tip-free, cash-only model, with the entire staff earning $18 an hour. After a few months, the bar reversed course.

“About three to four months in, I’m at the bar watching every single client trying to leave a tip,” said co-owner Kurt Huffman. “I put in place about the dumbest business model you could ever come up with. I figured out a more expensive way to have people make less money.”

Though $18 an hour is a good rate for kitchen staff who normally earn at or slightly above minimum wage, it represented a significant pay cut for bartenders.

“They’re still making a lot of money compared to the kitchen, but to go from making $300 a night to $180, that’s a big difference,” Huffman said. “The reason why people will hesitate to put in auto-gratuity is because, in every scenario, servers will make significantly less.”

And Park Kitchen‘s transition hasn’t been entirely smooth. After announcing the “One House, Gratuity Free” model, much of the service staff left, save for a pair of managers and Dylan Kiewel.

Kiewel, a longtime restaurant industry worker who joined Park Kitchen last year as a bartender, says he’s watched the pay difference between front- and back-of-house staff steadily grow. He stayed on at Park Kitchen because he has young kids, and because his new gig — running the restaurant’s private dining — offered more stable hours.

“I’ve always seen the fundamental unfairness of the way money is distributed in restaurants,” Kiewel said. “It’s not that servers make way too much, it’s that cooks make way too little.”

He still picks up service shifts in the dining room, but he understands why his colleagues walked. “They built their lives around trying to make the money quickly in part time hours,” he said.

For many in the restaurant industry, the move is as much about fairness as it is accounting.

“It’s time for Americans to give up the fallacy that they’re their server’s boss and that their tip is actually influencing service,” Fortgang said. “The server doesn’t know what your standard is, so if you’re a 20 percent tipper and you give 15, they don’t know that you’re trying to send them a message.”

Before the Southeast Portland restaurant went tipless in June, Fortgang estimated server pay would go from about $42.50 an hour to $38.30, a 10 percent cut. At the same time, back-of-house wages were expected to increase by about 13 percent.

For Fortgang, eliminating tipping was a way to streamline the experience for both customers and staff. It’s also a way to cut out a potentially fraught final step in what might be a once-a-year meal.

“Cooks work super hard, they work long hours, they traditionally don’t get paid a lot,” Dolich said. “They’re [paid] close to minimum wage and they feel like they don’t get a lot of respect.”

Chef Sapp said at many restaurants, even those that share a portion with cooks and dishwashers, tips are often “whisked away into someone’s pocket.”

“I’ve seen kitchens where there is a lot of that disparity and anger — ‘All you are is a pretty face and we’re back here sweating and toiling,'” he said. “For me, that wasn’t as big a deal. Work hard, keep my head down, maybe I’ll get a raise.”

When Ox chefs Greg and Gabi Denton opened their second restaurant, SuperBite, the couple wanted to establish a tipping system that would benefit servers, cooks and diners. Though the restaurant has a full front-of-house staff, there are a handful of what the Denton’s call “cook-servers,” who in addition to helping in the kitchen, polish silverware, run food and spend one shift a week bussing tables.

“We wanted to attract the best of the best and to do that you have to pay people more money than a normal cook budget might ask for,” Gabi said. “Just getting a small amount of the additional tips really becomes a situation where an entry level cook will make a livable wage.”

Park Kitchen switched to their “One House, Gratuity Free” model on July 1.

Under the new format, nearly all servers and cooks have been cross-trained on all kitchen and floor stations, with dishwashers starting at $12 an hour and cook-servers at $15. All full-time employees qualify for medical benefits. Now, servers may spend three days waiting tables and two days working in the kitchen. Eventually, interested cooks might find a bartending shift on their weekly schedule. Managers, bartenders, prep cooks, porters and the head chef have maintained their current positions.

The entire staff at Park Kitchen also wear the same denim apron, a nod to the idea that the restaurant is “one house,” sharing in the work and pay equitably across the board, regardless of where they’re working that night. The apron allows seamless movement from the back to the front of house, depending on who needs help.

“We call it a ‘pressure release valve,'” chef Sapp said. “If we’re getting stopped up in the front, anybody can go anywhere and allow that ease. The idea is that we’re stressed and busy but the guests have no idea.”

Most restaurants that planned to eliminate tipping have increased their prices to offset the cost of paying their employees more. Some, like Park Kitchen and Le Pigeon, have raised prices by around 18-20 percent across the board. For anyone who normally tips 18 percent or higher, the out-of-pocket expense is roughly the same.

So far, the only question Dolich had is why he didn’t make the change sooner.

“The feedback has still been overwhelmingly positive,” Dolich said. “The only real complications that we’ve run into, and it’s not really a complication, is when people want to tip above and beyond.”

On a recent Tuesday at Park Kitchen, three faculty from Pacific Northwest College of Art sipped brews on the breezy patio. Tracey Cockrell, the school’s Chief Academic Officer, said she had spotted the “gratuity free” sticker in the window, but hadn’t realized what it meant until asked for her opinion by a reporter.

A play on the percentage symbol, the “gratuity free” sticker was created by a New York restaurateur as a way for restaurants to communicate to guests that tips are included in their bill.

Cockrell, who said she had been coming to Park Kitchen “on-and-off for years,” said she approved of the change.

“I put myself through school waiting tables,” Cockrell said. “I’m happy to hear it.”

Read the story on Oregonlive.com