Portland is widely regarded as one of America’s greatest food cities, but that’s due in large part to what lies beyond city limits: Oregon’s farm-fresh abundance.

Home to evergreen forests, arid deserts, snowy peaks, grassy prairies, rocky coastlines and almost every ecosystem in between, this sprawling state is a wonderland of potential ingredients. Our bounty — from grass-fed beef in Eastern Oregon to sweet Dungeness crab harvested from beds of eelgrass off the Coast —feeds an ever-evolving and growing dining scene, permanently enshrining its place amongst the upper echelons of culinary destinations.

I sat down with five Portland chefs to talk about Oregon’s food scene and their love affair with five of the state’s most defining ingredients.

There’s nothing quite like the taste of sweet Dungeness crabs pulled straight from the frigid waters of the Pacific Ocean.

“In Baja we grew up eating crab,” Chavez says. “My menu is driven by what’s in season in seafood —butter clams, lingcod, mussels, clams, obviously Dungeness was at the forefront. It’s beautiful; it’s also very humble.”

While in season, Chavez’s Dungeness arrives fresh daily from friend Kristen Penner and her husband, who are based out of Garibaldi. But the commercial crabbing season doesn’t last all year.

“I try to have it as seasonal as possible,” Chavez says. “It’s trying to change the expectations of your patrons with seasonality and flavor, and they come to expect it. They call and ask when it’s going to be back on the menu — developing a little of that anticipation.” 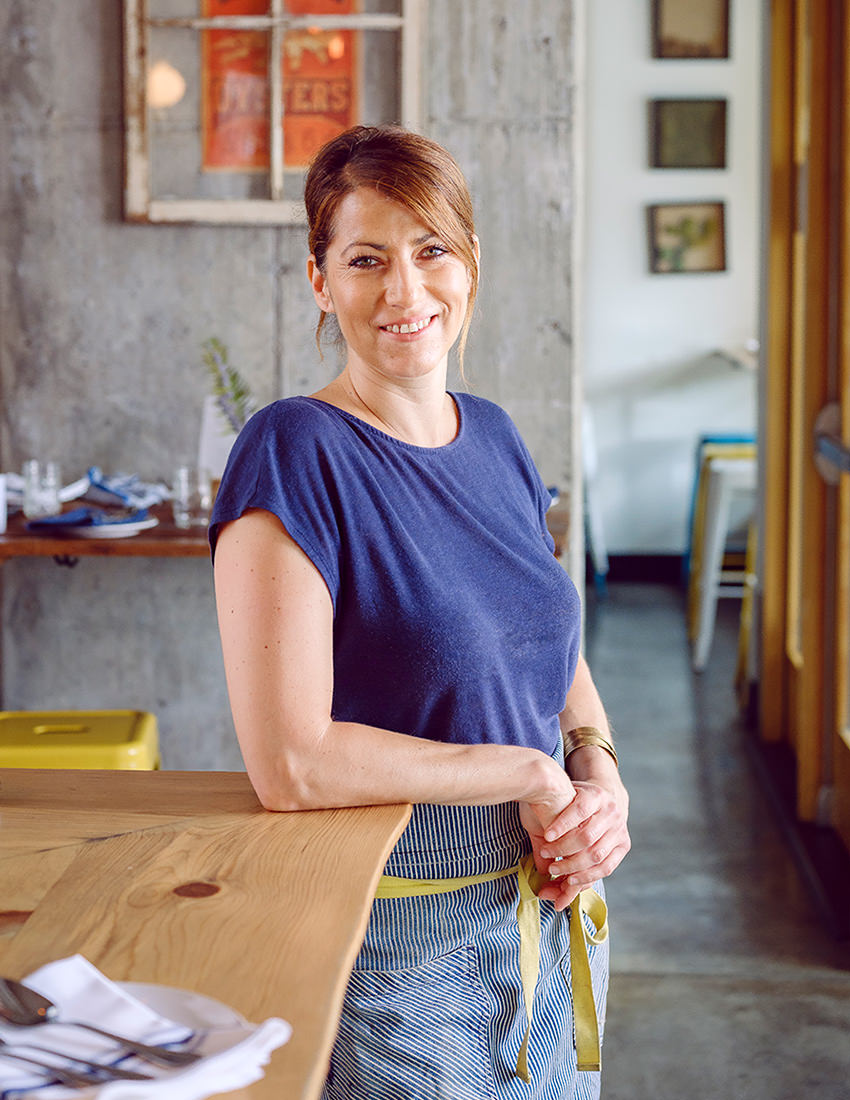 Season: Crabbing is a rite of passage on the Oregon Coast, and it’s a lot of fun, too. Recreational crabbing is open year-round at estuaries, tide pools, beaches, piers and jetties, though fall tends to be the best time of year to go. It requires minimal gear and a license (buy online here). The Oregon Department of Fish & Wildlife has a handy how-to guide here. The commercial crabbing season typically runs from mid-winter through late summer.

Park Kitchen chef and owner Scott Dolich has been working with Carman Ranch in Wallowa, one of Oregon’s premier grass-fed cattle ranches, for more than two decades.

Carman Ranch, the 105-year-old, family-owned cattle ranch in Eastern Oregon, is one of a number of A-list Oregon beef producers sought after by restaurants and avid home cooks. The cows, which are completely grass-fed and finished, graze through pristine pastures in the shadow of the snow-peaked Wallowa Mountains.

Their diet — with some potential help from the incredible scenery — results in meat rich enough to pack that beef punch while using a lot less, Dolich says. Recently, his menu featured the meat seared over a salad, and grilled and served with Taleggio, kale and pickled cipollini onions. The colder months bring warm chile-braised cuts and hearty stews.

“Especially with [Carman’s] stuff and Oregon beef, you get that intensity that enables you to not overload on it,” Dolich says. “But from a sensory standpoint, it leaves you with a lingering perception of what beef should taste like.” 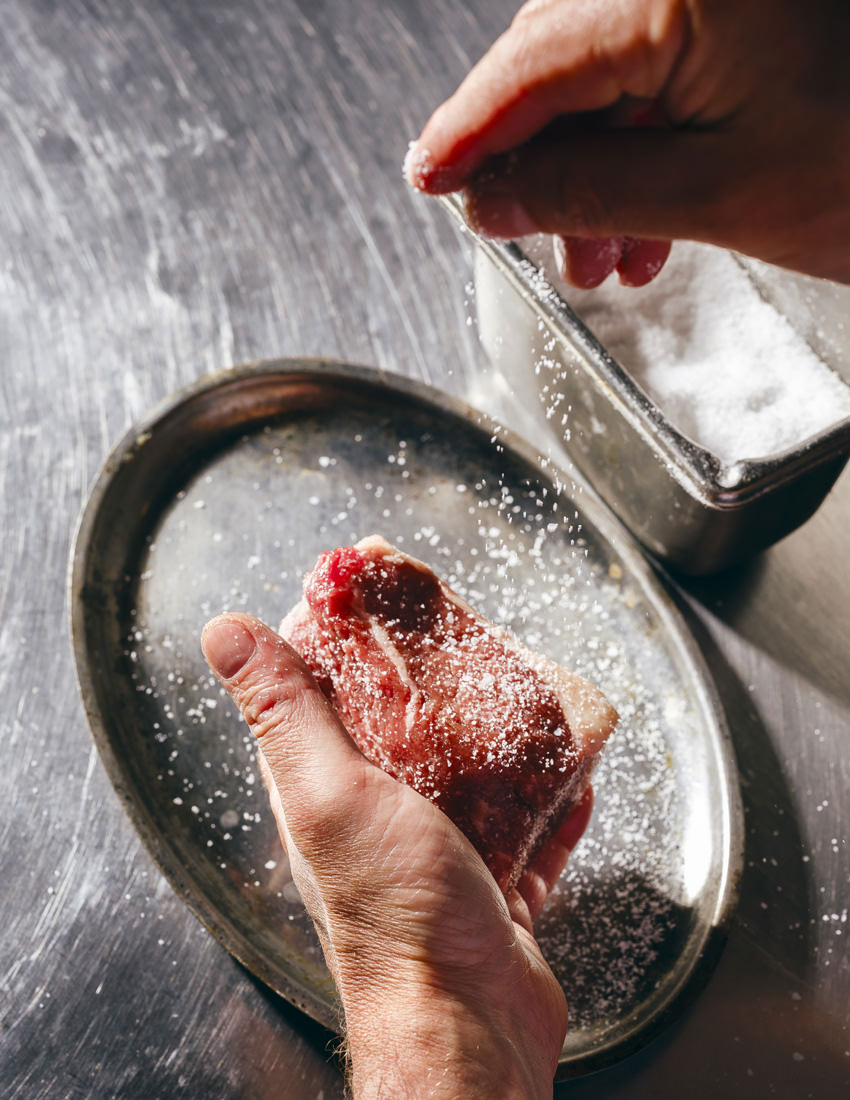 Season: Always in season, though tougher braising cuts like cheeks and short ribs are perfect for winter stews, while more tender “temperature” cuts — like tenderloin, flank or bavette — are great for grilling during the warmer months.

Did you know Oregon is one of the few places in North America where truffles grow natively?

The aromatic, luxury ingredient is more commonly associated with Italy or France, but in recent years, with help from the annual Oregon Truffle Festival and local enthusiasts, the Oregon truffle is starting to make a name for itself across the country.

Unlike the wildly expensive Alba or Perigord truffles, which can cost hundreds of dollars per pound, Oregon truffles are about one-tenth of the price, says Justin Woodward, the chef of Southeast Portland’s Castagna. The restaurant’s locavore approach inspired Woodward to cook with the state’s black and white truffles.

“I first started using them because they’re a product of Oregon and we were trying to use local ingredients,” he says. “After using them for a few years, I got contacted by the Oregon Truffle Festival. They provided me with a large quantity of truffles so I was able to experiment more with them.” He eventually signed on with the festival and has participated in a number of events.

Woodward has infused cream to be churned into ice cream, butter for cooking and even eggs that, when set and dusted with salt, tasted like biting into a truffle. You’ll find them on the menu of Castagna when in season, as well as restaurants around the state. The best place, though, to taste them is the annual Oregon Truffle Festival, which takes place in January and February, during the height of truffle season. 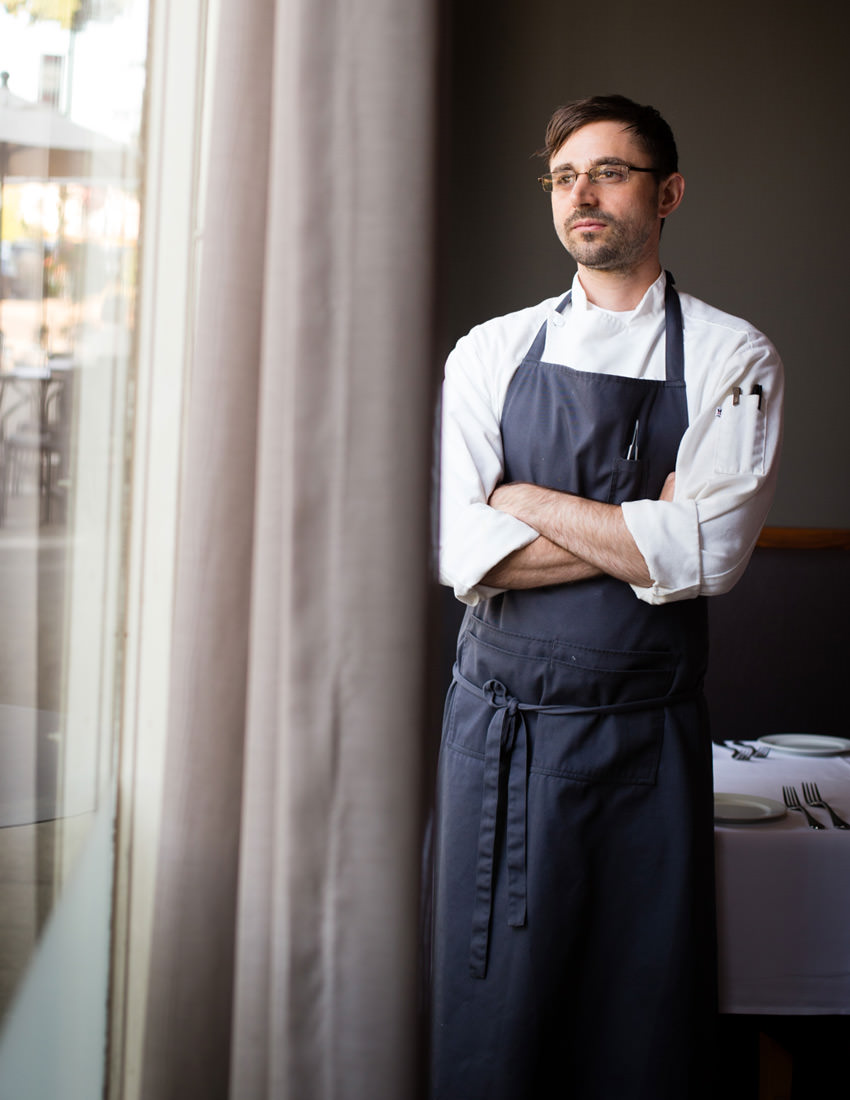 Season: The winter months. Though if you’re hoping to get your hands on some, it’s best to go with a guide or a group using a truffle dog. Or skip the work and head to the annual Oregon Truffle Festival.

Marionberries With Nora Antene of Tusk and Ava Gene’s

If you’re not from the Pacific Northwest, you may have never heard of marionberries.

Bred specifically for Oregon’s climate by Oregon State University and the USDA’s Agricultural Research Service — it’s named for the county where it was first cultivated in the 1950s — the marionberry is a cross between the Chehalem and Olallie blackberry varieties. It has an incredibly short growing season, often just one month in the summer between July and August, making the “Cabernet of blackberries” one of the most sought-after summer berries, which rarely gets shipped out of state.

“Marionberries are always the most fragrant,” says pastry chef Nora Antene. “They have almost a tea-like quality — really floral. They’re a lot more interesting than a lot of other berries, more depth.”

At Tusk and Ava Gene’s, where Antene runs the pastry programs, you’ll find marionberries baked into pies, frozen into granitas, macerated with Marsala for zabaglione and served as they are atop Tusk’s kanafeh, the restaurant’s warm woven nest of crunchy phyllo and fresh cheese soaked in syrup.

“Honestly, the best way to showcase summer fruit is to keep it simple,” Antene says. “Make a pie. They’re good on their own; you don’t need to mess with it.”

You can pick marionberries and other fresh berries at U-pick farms, especially in the Willamette Valley and the Columbia River Gorge, as well as around Mt. Hood. Farmers markets around the state and festivals such as the LifeWise Oregon Berry Festival in July celebrate the delicacy. 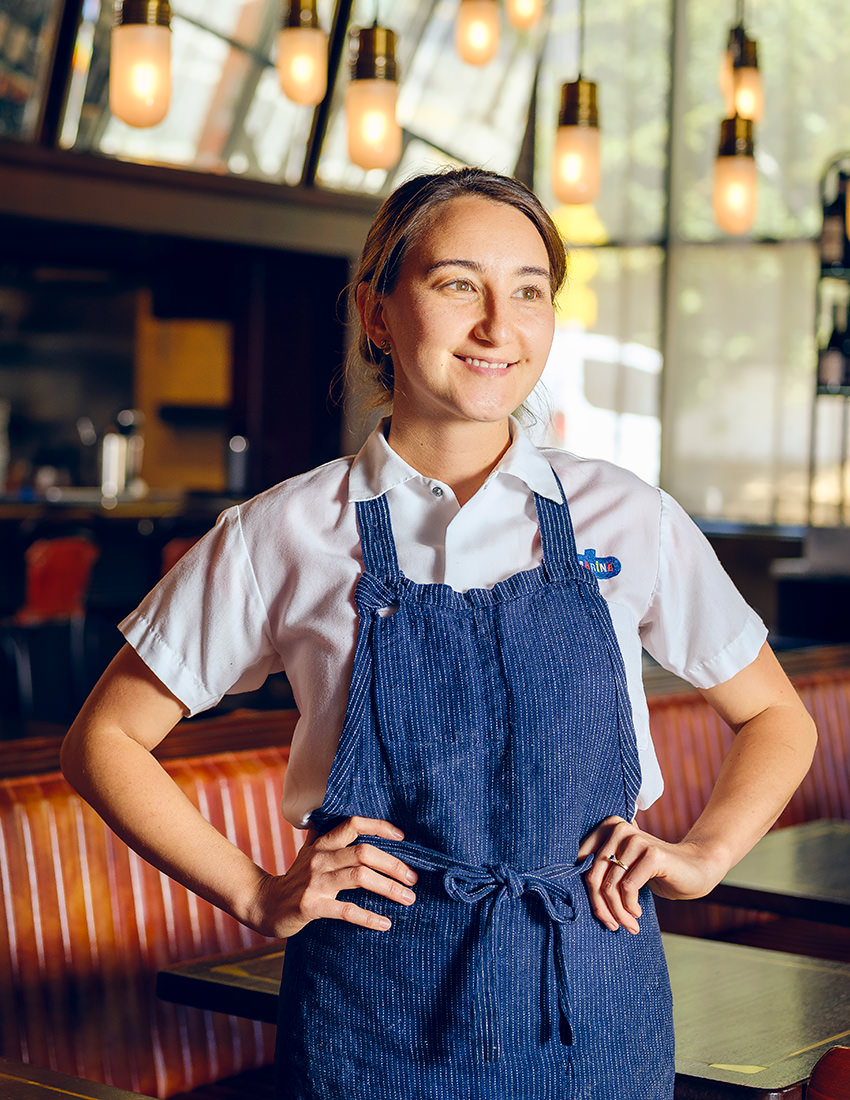 Season: In season for picking mid-July to August, though you’ll find marionberry jams on the shelves of local markets year-round.

Hazelnuts With Katy Millard of Coquine

There might be two weeks a year when Oregon hazelnuts (sometimes called filberts) aren’t on Coquine’s menus in some form. You’ll almost always find them baked into shortbread, candied with bee pollen and black pepper for a cheese course, crumbled into streusel toppings, toasted for cool summer gazpachos, and crystalized into praline candy for the candy tray.

“I just love them because they’re not limited to sweet dishes,” Millard says. “They lend themselves to savory dishes as well, so we can use them over the gamut of breakfast, lunch and dinner, and have them all over the place. They’re a very versatile ingredient.”

Oregon is responsible for 99 percent of the country’s hazelnuts. And though they’re available year-round, chefs here are lucky because they have access to the freshest filberts anywhere. It’s an opportunity Millard doesn’t take for granted.

“I think people think of California as this proverbial land of milk and honey, but for me, Oregon is more so,” she says. “We have almost a 12-month growing season, and we have such an incredible range of beautiful products that grow here: fruit trees, berries, hazelnuts, and then there’s the seafood that comes off of the Coast, farm and ranch land in Eastern Oregon. It’s incredible what people can do here — I think Oregon is the land of milk and honey.” 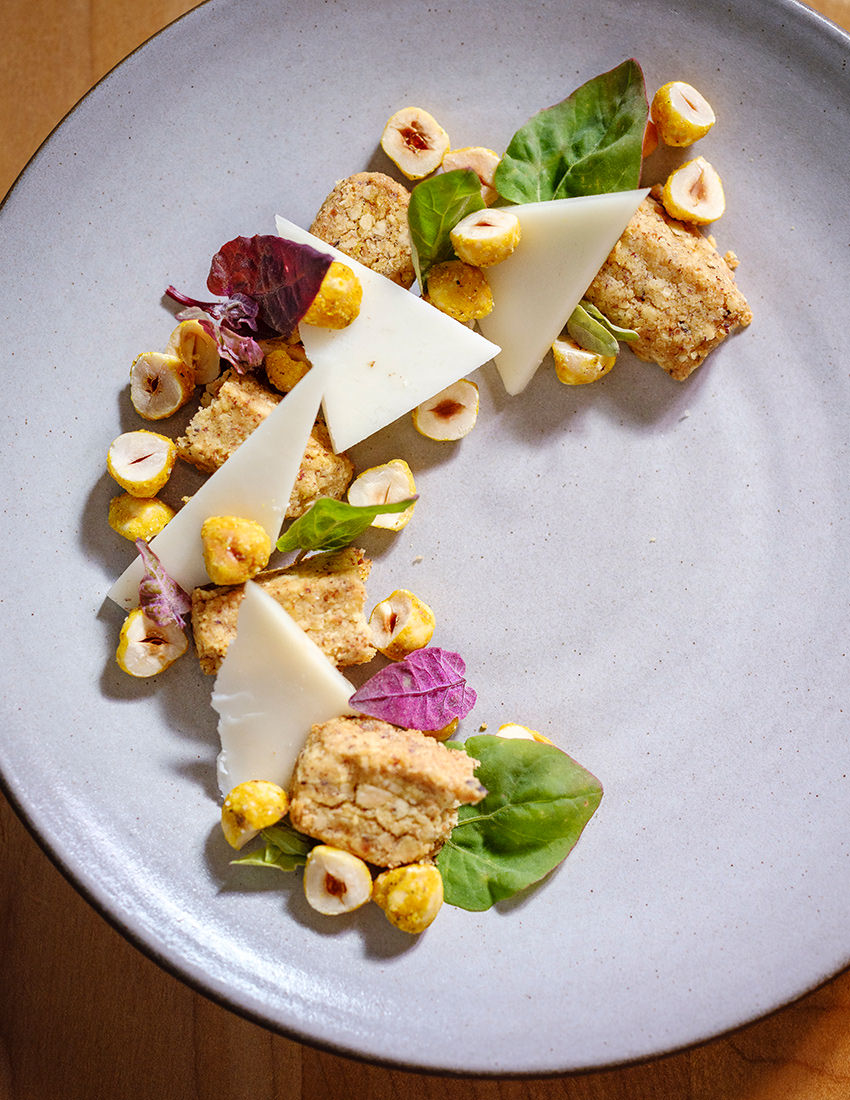 Season: Freshest in the fall, though can be purchased year-round after drying and proper storage.