Portland is home to hundreds of breweries, brewpubs, and taprooms, but there’s only one place where you can have a pint while you brew a keg of your own beer.

“Bigger brewers have a small pilot system to test new beers on,” said U Brew owner Zach Vestal. “We only have the pilot system.”

Portland U-Brew and Unicorn Brewing were opened eight years ago in southeast Portland by father-son duo Cliff and Jason Webb. Inspired by the Canadian “brew-on-premises” model, the two created a unique space where budding homebrewers could source ingredients for their projects or brew larger batches of their own beers onsite with the help of professional brewers and a full-scale brewing system.

The concept quickly garnered a cult following. Zach Vestal, a former elementary school teacher, used the space several times a year until 2018, when he took over the business. Now, Vestal gets a chance to combine two of his passions: teaching and beer. “I get the same satisfaction from teaching someone how to brew a batch of beer as teaching a kid multiplication,” Vestal said. “The only difference is everyone is happy here.” 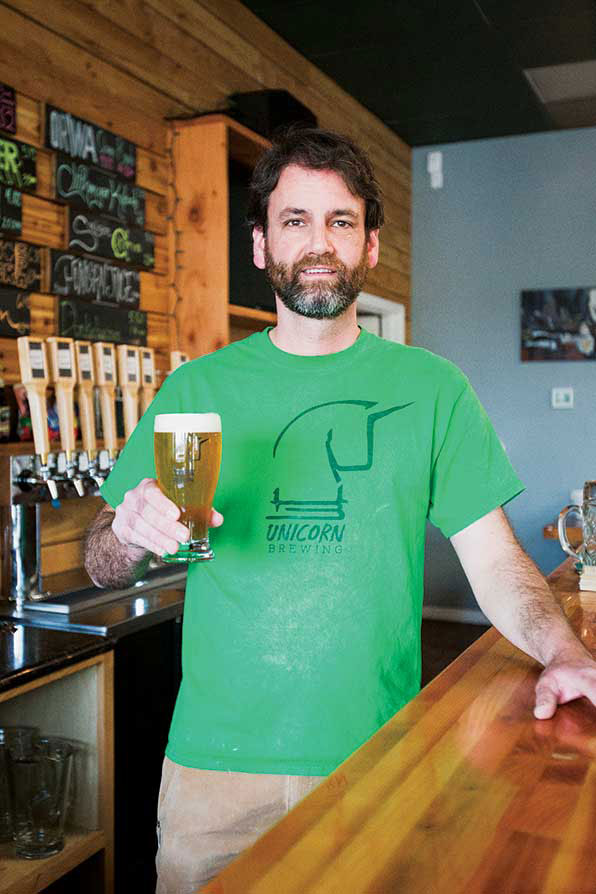 A quarter of the double-decker space hosts the malt-scented store lined with grain-filled containers, bags of locally sourced yeast, and basic brewing equipment. Another quarter is home to the wood-lined taproom of Unicorn Brewing, which serves rotating drafts of traditional styles like American IPAs, English mild ales, and a beloved German blonde ale, leaving the boundary- pushing creations to homebrewers who also use the nano brewery.

This basement brewery, visible through a fenced-off cutout in the taproom, has a sextet of copper, steam-jacketed kettles lining the furthest corner, each capable of producing 20-gallon batches of beer. Other rooms host fermenting, chilling, and soon, barrel-aging. For many homebrewers, using U-Brew’s facilities is the next step. For $250, they get all the ingredients, instruction, and equipment needed to fill kegs they can store in their kegerators at home and enjoy for months.

While some might see the custom, small-batch mindset as limiting, U-Brew’s nano capabilities have been a big advantage, according to Vestal. “Bigger brewers have a small pilot system to test new beers on,” he said. “We only have the pilot system.”

A number of commercial Portland beer labels have started in this basement brewery, including Baerlic Brewing, Grixsen Brewing Company, and Magic Owl Brewing. Interns who cut their teeth at U-Brew have also gone on to work as brewers (and a distiller) at McMenamins, Breakside Brewery, and Zoiglhaus Brewing Company. First-timers hoping to pick up a few tips will find a brewer pouring suds behind the Unicorn Brewing bar, while those who stick to drinking beer rather than making it can stop by any day and enjoy a pint.

“We’re about as beer-centric a place as you could imagine,” Vestal said.

Read the story on Suitepdx.com.