There’s nowhere else like it in the world. Taking up a full city block, the three-story Powell’s Books is one of the greatest landmarks in Portland. It’s home to more than 2 million books, with something for every visitor in the store’s 3,500 sections ranging from botany and maps to LGBTQ erotica and rare books. We asked four employees across the store and its sister locations in Portland what brought them to work at the local hallmark and what books they recommend for reading up on the Pacific Northwest.

A 13-year veteran of Powell’s Books, Jason Weeks had always thought a bookstore was one of the coolest places you could possibly be employed. “You’re working with books every day,” Weeks said. “Generally, it’s a very positive, open place that celebrates reading and knowledge. … After you work in a bookstore for a long time, you realize you’re not just reading what you started, your tastes have expanded and you’re reading more. It’s a blast.”

SET IN THE PACIFIC NORTHWEST

“Bigfoot is an enduring myth. People think about salmon, rain, and Bigfoot here, so after a while, it starts to soak in. It’s something that’s hard to explain to people from out of town. The book isn’t as much about a big hairy primate in the woods as it is the mythology of Bigfoot. Where Pyle is researching, he’s actually going into the wilderness, going backpacking looking for him, interviewing bigfoot seekers. … It’s a book that can only exist with a strong attention to place.”

“Absolutely a must-have book … it shows his humor, definitely has some adult humor. [It] will tell you about classic well-known hikes but will also tell you about some really obscure stuff like caves and river walks, historic sites, places to skinny dip and drink beer. They’re very detailed and very well-researched, something any local should have and any visitor. [It will] get you off the beaten path and somewhere exciting.” 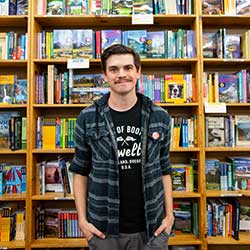 On Ryan Sprinkle’s first visit to Portland, he and his future wife discovered Powell’s Books and spent the better part of a day exploring its shelves. After a few more visits to the city—each anchored by the northwest Portland bookstore—the couple relocated to it in 2015, renting an apartment near the shop. In the early days of their move, Sprinkle said, Powell’s became a haven for him.

A listing for a part-time job shelving books came up later that year, and Sprinkle jumped at the chance to work at the place where he spent so much of his time. Four years later, he works in the contact center, helping guests with web and email support, though you still might find him looking up titles in the gold (sci-fi, fantasy, and graphic novels) or red (travel) rooms.

“I was telling my wife the other day, we look back at San Francisco and see so many of our favorite things have closed or changed,” Sprinkle said. “We were thinking about Powell’s, like, ‘Nah that’ll always be there. That’s a rock. A big boulder in the middle of town nobody can move.’”

“Portland has a great small zine community. This is a great one because it covered a lot of the stuff I was interested in seeing—used record stores, best coffee, which movie theaters serve beer and which ones don’t, which play old movies and first-run movies. That was a cool thing we found when we moved up to Portland. In The Zinester’s Guide, it’s organized by neighborhood.”

“All the stories involved in it are written by booksellers at Powell’s, other booksellers, or people associated with books. Each issue is themed by what we call ‘department category,’ like paranormal romance, or there is one for nautical lore. It’s always themed on a section in Powell’s, with a cover colored to the room where that section is in. It’s a fantastic journal.” 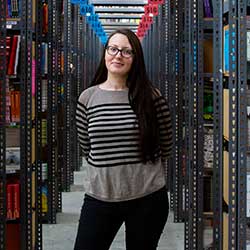 Wanting to promote non-English books led Lauren Littlefield to work at Powell’s in 2017. After editing a book, Littlefield thought about becoming a librarian, then learned how difficult it was to break into the field. When she applied for a librarian position but didn’t make it past the first round, she processed her disappointment by visiting Powell’s, a place Littlefield said helps her not feel as lonely.

“I remember walking around the orange room downtown, and throwing myself at the poor customer associate at the desk, like, ‘I want to be a librarian, how do I do that?’ and she said ‘We all have librarian and info sciences degrees as well, you should come work with us.’”

My Abandonment by Peter Rock

“I recommend [this] constantly to kids and grown-ups alike. [Peter Rock] is a local author, teaches creative writing at Reed College. It was recently made into a movie, though the movie has a different name. It’s a fictionalized account of a real story of a father and daughter that were found living in Forest Park.”

“One of my favorite things that I’ve found in a long time. … It’s set in the Northwest and talks about some of the island communities and the special relationship they have with each other. We love it when a Powell’s employee publishes something. … It’s a little dystopian and inspired by reading Mycelium Running, a book about mushrooms and how they can help better the environment.” 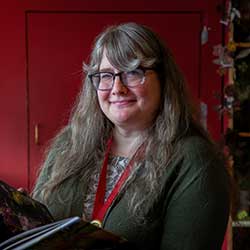 When Leah Cushman was in college, whenever her parents asked what her career aspirations were, she would tell them she just wanted to work in a bookstore, never realizing that could be a career of its own. After graduating, she bounced around bookstores in the Bay area, including Bookshop Santa Cruz and a children’s bookstore, before moving to Portland in 1999, when she was hired by Powell’s.

Over the past 20 years, Cushman has left and returned to Powell’s three times, first to get a master’s degree in library and information science and work in library and other book industry jobs, and then to try out the software industry. She returned for a more technologically focused position before becoming a new book buyer, selecting new books for sections in all Powell’s stores including spirituality, self-help, Pacific Northwest, and gardening.

“Local publisher Microcosm has lots of great Portland guides, [and this is] one of my favorites. It’s a super-charming guide to the Portland of Beverly Cleary, both where she herself lived and also the locations that inspired her beloved characters.”

SET IN THE PACIFIC NORTHWEST

“[This book is] about the 1810 Astor Expedition that tried (and mostly failed) to turn a remote spot on the Oregon coast into the center of a fur-trading empire. It’s a fascinating story and you really can’t put this down—it’s great for fans of John Krakauer and The Lost City of Z.”

“Another more literary title I really love is [this] memoir written by a Native woman who grew up in British Columbia. The writing is unusual, beautiful, haunting, and very honest, it’s gorgeous. And while her life has been extremely difficult, you end the book feeling hopeful for her future—we’re going to hear more from her, and I can’t wait.”

Read the full story on Suitepdx.com.